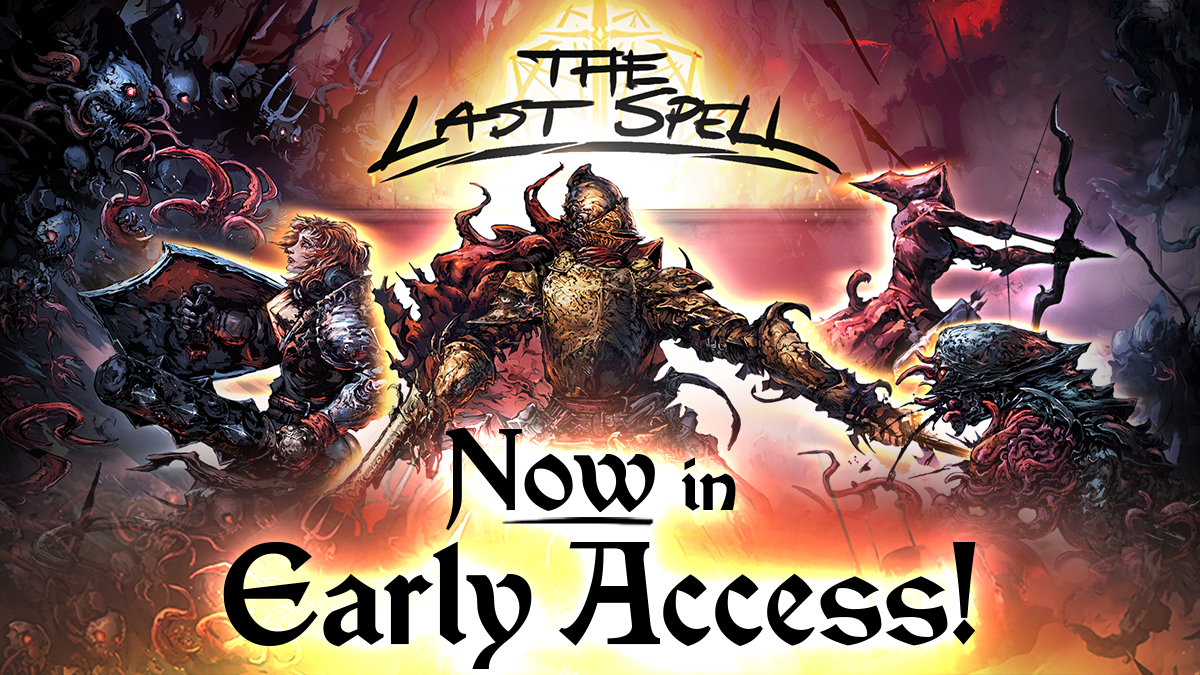 That’s it! The Last Spell is finally available for all to play in Early Access on Steam!

This is a special day for the team, it feels like the end of an era, and the beginning of a new one! We have already been working on the game for 3 years, and are getting ready to continue working on it as long as it makes sense.

So today, a special post detailing what this game is about, all the actual content of the game to this day, and our plans for the future. Be prepared for a looong read!

The game as it is now

The Last Spell is a tactical RPG with roguelite elements. You play a group of heroes in a medieval post-apocalyptic world and you have to defend a city, the last one standing, against hordes of mutated monsters who come out of a strange Mist at night. During day, you can rebuild the city and take care of your heroes.

For now, you must survive 11 nights against increasing hordes of enemies before reaching a boss fight. If you survive it, you “win” the game as it is now.

Easy, right? We’ll see… The game is meant to be hard, so don’t despair over failing “a few” times before reaching the end, it’s supposed to be that way! And this is where the “roguelite” elements kick in: every time you play you unlock upgrades and new toys for your next runs, which in the end help you get further and further (and you’ll learn by yourself new tricks and strategies along the way)

Even more than that, when you finish the game for the first time you unlock new difficulty modifiers and you can try a new run with those enabled… So you should get enough content for “a while” (for an average “good” player, it could mean at least 30-40 hours just to reach the boss battle and win it, so…)

You’ll see that at first, you won’t have a ton of content to play with: we designed it on purpose, The Last Spell is a rather complex game if you don’t play it carefully, unlocking new toys to play with every couple of hours or so is a lot less intimidating for new players. We will change the pacing of unlocks and the game’s progression flow A LOT during the Early Access, this is why we need your feedback about that! So far we think the pacing is pretty good, a bit slow maybe, but it’s hard to find the right balance between players who will tear through the game in a few runs, and others who will struggle for way too long. (that’s why we added some easier starting settings options, don’t hesitate to use them!)

Let’s talk a bit about the actual content you will be able to see in the game as it is now:

Character’s portraits get procedurally generated with:

Our plans for the future

This is not the end for us… just the beginning! We already have a roadmap of new content we want to implement into the game, other than balancing and bugfixing. This list can drastically change over the course of the Early Access, depending on your feedback.

So you get the spirit of what is to come, here is a few hindsights:

That’s it for the main things on our list! Of course, there will be a ton of smaller (and bigger!) surprises that we will cook, we have a fun idea which is almost ready to ship into the game, so keep your eyes opened in the coming weeks 😉

In terms of temporality, we will need a bit of time before knowing exactly at which frequency we want to push updates into the game. We have the manpower and process to push very regularly updates, but since The Last Spell is a LONG and difficult game to playtest, it can be a challenge for us. This is another reason why we wanted to enter Early Access: we can’t playtest in “real” conditions every little change we will make in the game (which can have repercussions dozen and dozen of hours later x)), so every little feedback the community can give us is very valuable for us!

On that note, one final word to thank our closed-beta playtesters: thanks to them you will get a so much better first experience with the game than 3 weeks ago, their help was priceless! So thank you for your time and dedication, you are the best <3

That’s it, we are so impatient to see people playing The Last Spell and tearing the game apart! Don’t hesitate to stream, comment, argue, be it here on the Steam forums or on our Discord server where you can directly report bugs or ideas to the team! You can also use Feature Upvote:

We will be reading everything, be it words of encouragement or constructive criticism, every tiny bit of feedback is useful.

And if you want to support us, don’t hesitate to leave a recommendation on Steam, it helps us a lot gaining a bit of visibility.

Jake
Just now saw this via Mr. Fruit. I love tactics games and some roguelites. Any ETA on Switch release? Was so happy Google the game and see it wasn’t just PC.
0
Reply

bruno
Thank you! Console versions are planned after the game exists early-access :)
0
Reply

Vincent Tyler
Keep up the great work! I really enjoy your game :)
0
Reply

Curtis
Hi, I have been following a YouTuber called Mister Fruit and am hooked to your game. I have tried to buy it, successfully did, and then realised it was for Windows only (and I have a MAC). Gutted doesn't cover it. Anyway, when are you releasing it on MAC so I can ensure I buy it again? Also, maybe worth contacting Mister Fruit as he clearly loves the game and you should throw something good his way as he has made hours on content on YouTube - also maybe worth letting him know I passed this on ;) Awesome game and congratulations. Curtis Broadhead, Leeds, UK.
0
Reply

Richard
When will the game be out on Mac OS and/or Nintendo Switch. I’m chomping at the bit to play this game but don’t have PC. Game looks great.
0
Reply

bruno
Hello! The game will be released on console after it's out of early-access :) Thanks!
0
Reply