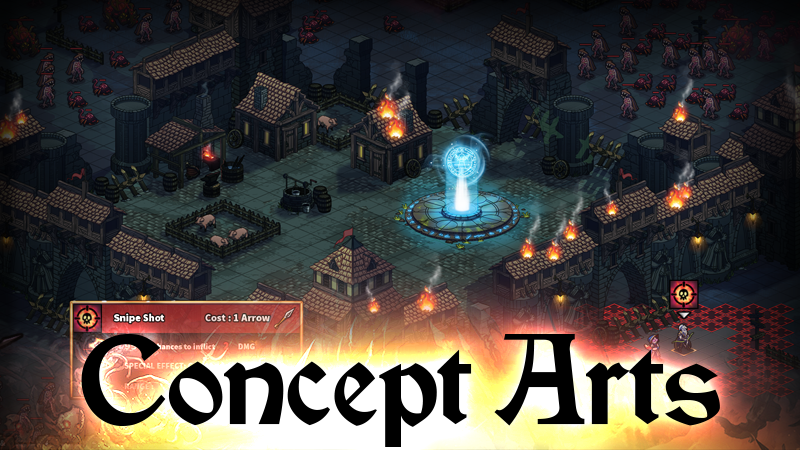 We hope you’re okay and that you’re staying safe! Here, summer is… kinda cold! It never stops raining, but at least we don’t need to turn on the AC. (Yes, we try to see the good side of things!)

It’s been one month since the “We can be heroes” update. We hope you’re liking the character customization feature! If you have cool characters to share, please feel free to do so in the comments or in our Discord server!

Since it’s summer, several people in the team are taking a well deserved vacation after the craziness of the launch 😉 Rumor has it that some of them got to see this strange thing called the “sun”! Weird, huh?

On the dev side, we’ve been mostly focused on the next big update! In this update, we’ll have the new map, which is taking more time than we anticipated. One of the reasons is that there are lot of game designs questions that come up with this new map.

We also have some new features for this update that we’ll tell you more about in another blogpost 😉
In the meantime, we thought some of you all might like to see some skecthes and concept arts for The Last Spell 😉 We started to work on these in… 2017! So yes, that goes way back (we were young back then!).

This one is VERY old! Last weekend, Jacques, our Art Director, found the VERY FIRST skecth that he ever did for The Last Spell! Long story short, Matthieu, our creative director, started to talk about the first ideas for The Last Spell and Jacques did this “very first rough sketch” thinking “ah yes that could be fun to work on a game like that”.

Then, when we started to talk about the game internally and with external partners, Jacques did those to give a more precise idea of the general atmosphere of the game.

As for the inspirations, we could mention 3 main ones for the pixel art of the game:

In terms of “mood/atmosphere”, Darkest Dungeon definitely comes to mind! However, Jacques was also influenced by the many movies/comics/games where you have hundreds of “things” trying to eat you!

As you probably know, at first, The Last Spell was not supposed to be a pixel-art game! If you didn’t already, I invite you all to read this fascinating piece that Jacques wrote last year!
How and why did we choose to use Pixel-art for The Last Spell!

Very early in the production, we had this idea of “a town being attacked by hordes of enemies”! It’s in French, so I’ll make the translation:

As you can see, there already were quite a lot of things that are still present to this day. One of the big concept that were there from the start was this asymmetric battle between a handful of strong heroes and countless hordes of enemies, in a city you needed to defend.

Here’s one thing that you haven’t seen yet 😉 (Unless you’re in our Discord server!). This was one of the very first concepts of the game (this is all “fake” by the way, this was made by our artists ^^). I’m sure you can find a lot of elements that are still present in the current version of the game 😊

Maybe I should let you know about the upper right side of the screen. That’s right, in one of the very first game design documents for The Last Spell (that was actually called “The Last Stand” back then!), there was a “survival” component. There was a food safe, and one character had to “scavenge” for resources! Sounds familiar with another one of our games, right? 😉

Also, the concept of ammunition stayed a very long time in the game! We actually removed it just before our first public demo in june 2020.

The boss (SPOILERS IF YOU HAVEN’T FINISHED A RUN YET!)

This part is a bit of a spoiler, since it shows the boss of the game. So, if you haven’t met it just yet, you can skip to the next part!

Here, you can check out the research board for the boss! As you can see, Jacques first works in “classic” digital paining before making the pixel art version of his asset. 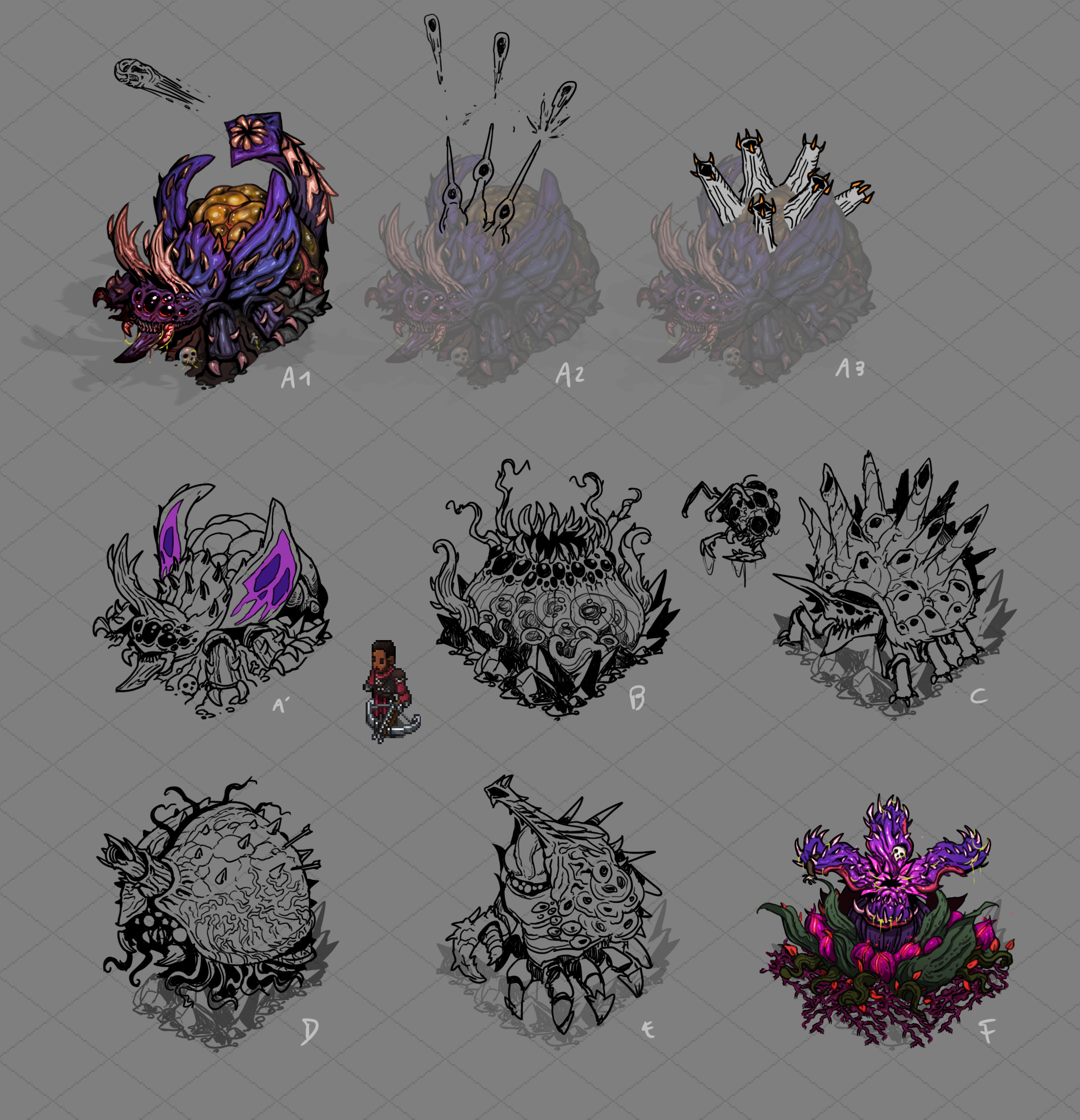 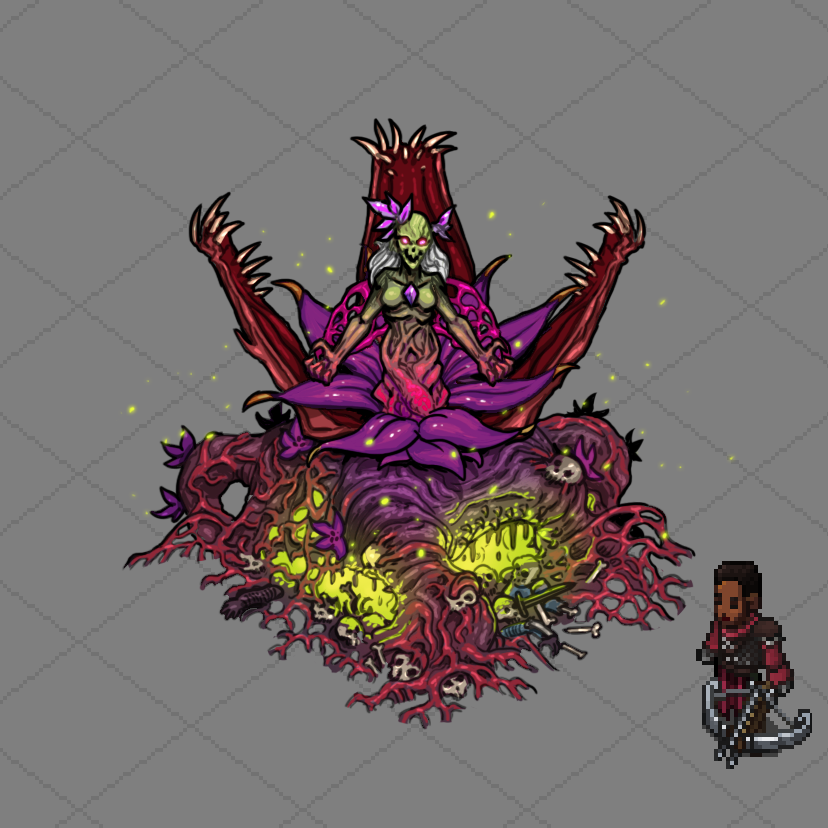 This is BIG spoiler territory again! Only look at this if you have completed the shops !

We did a LOT of research for the goddesses. As a matter of fact, their concept was present very early in the production of the game. 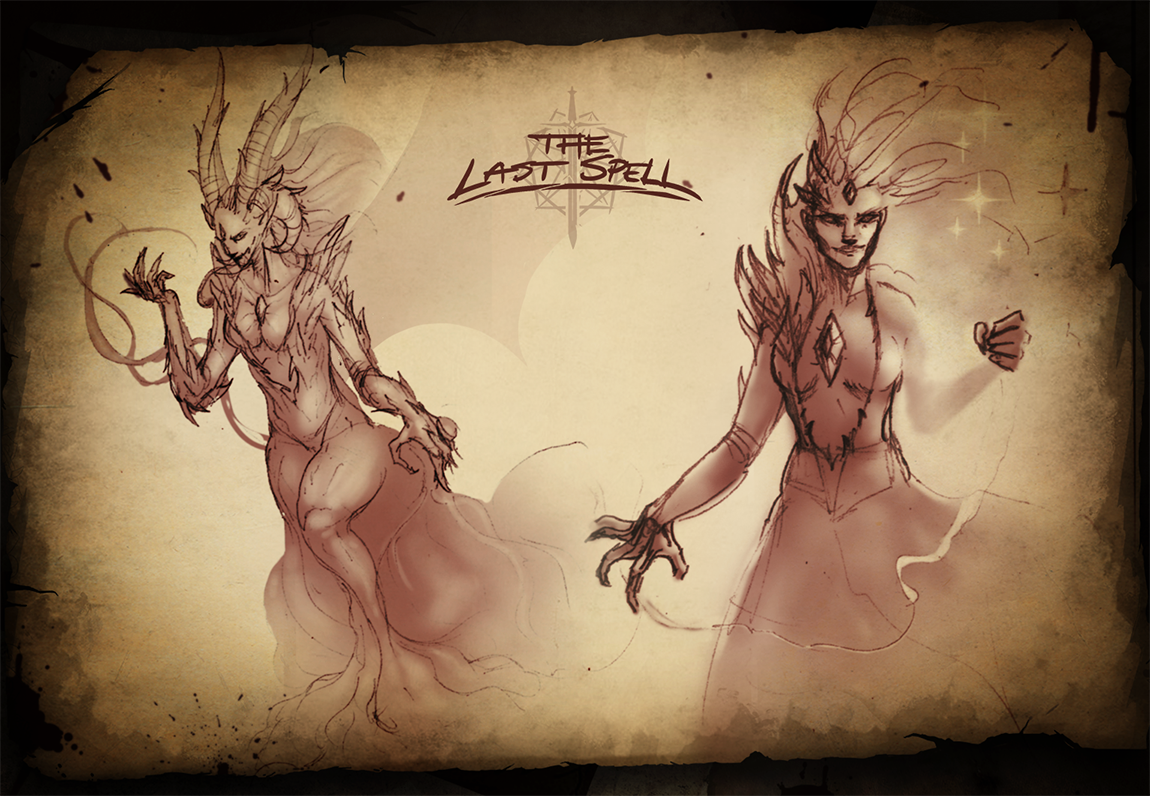 However, Jacques only worked on their actual design a few months before we entered early-access!

Since it’s linked to the story, we wanted them to be one of the surprises that players would discover! We hope you liked them! 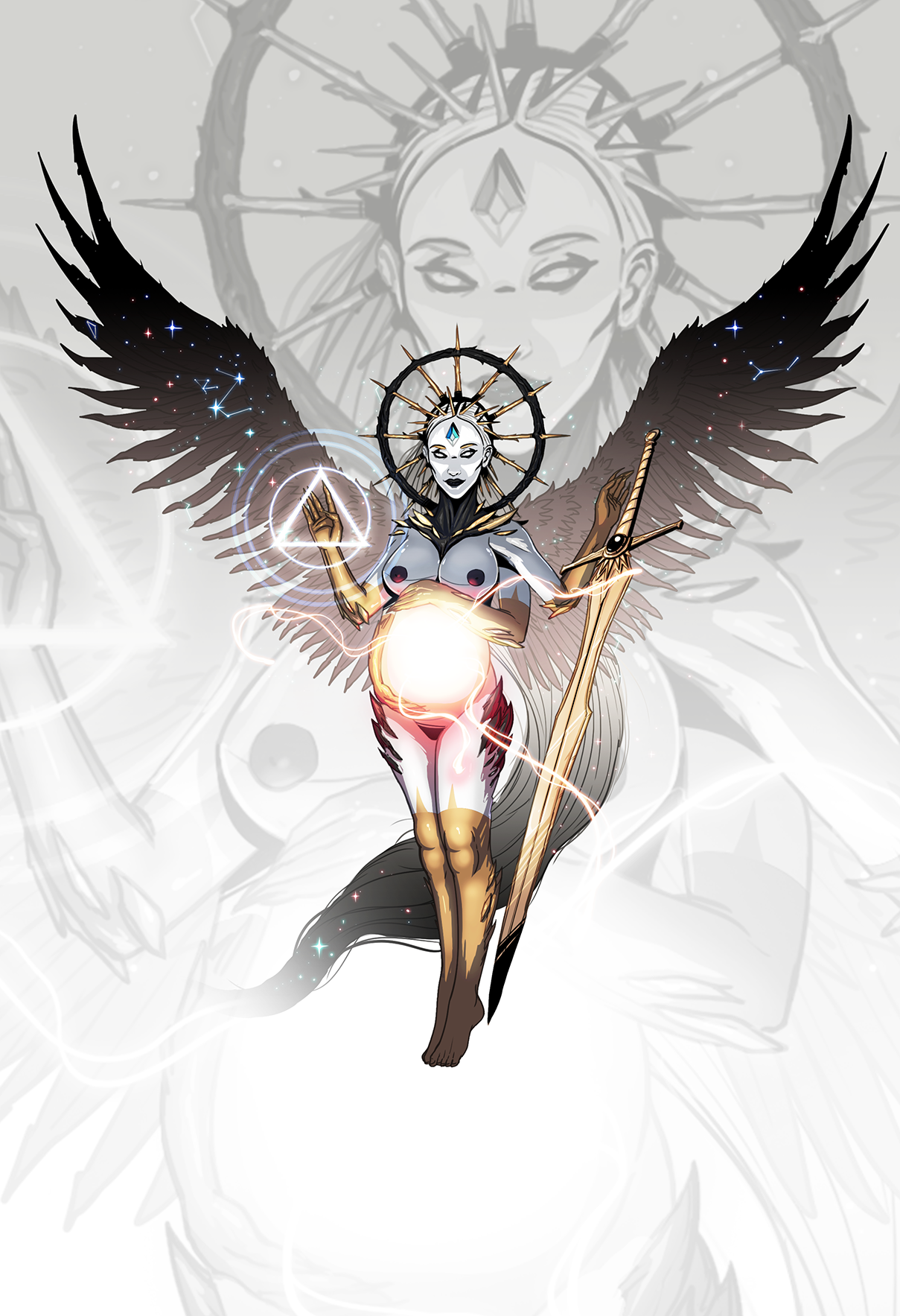 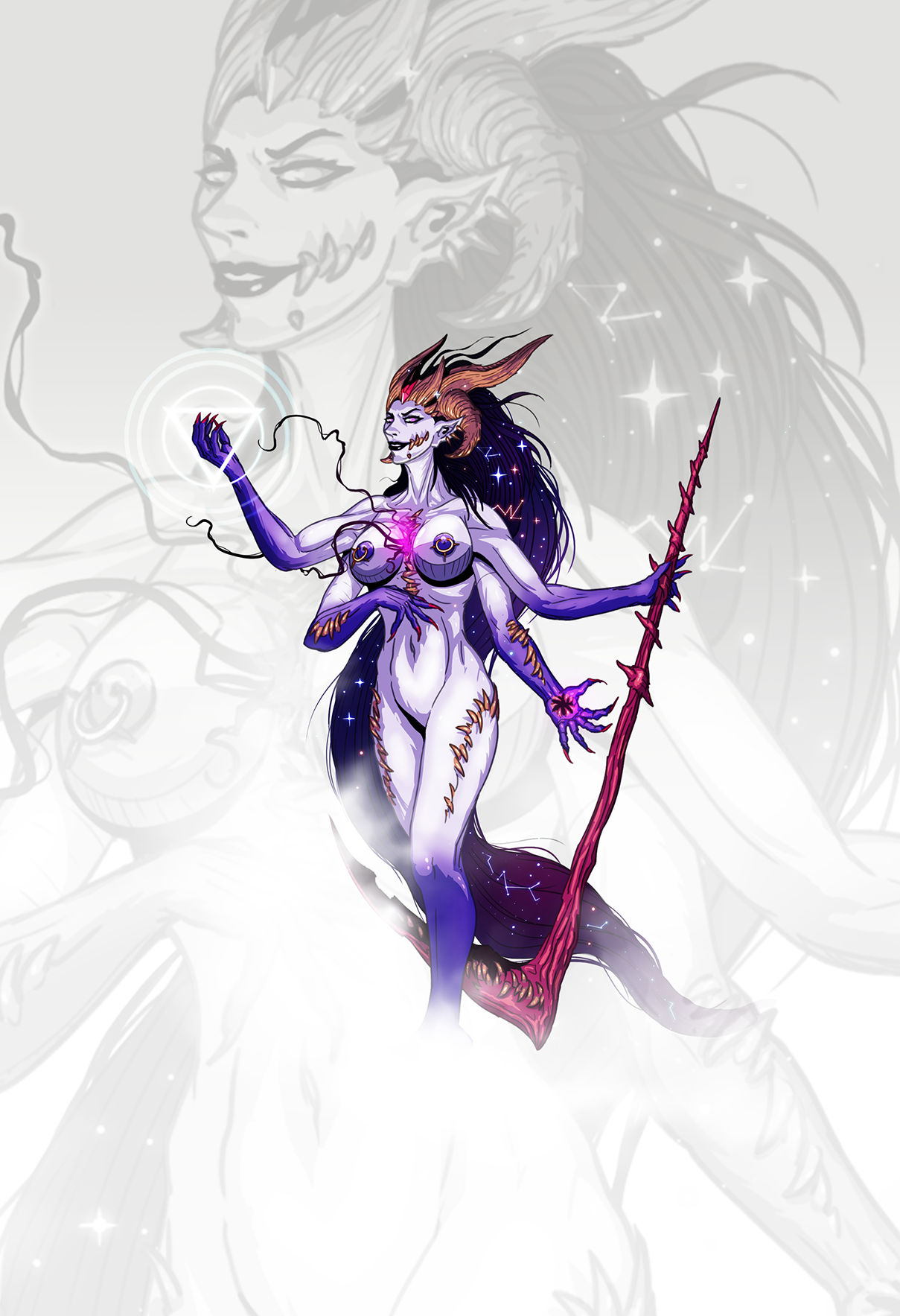 Alright, time for a fun fact: during the release period (around early June!), one dove made her nest right at one of the windows in the office. She had two babies, and guess how we called them? 😉

Aaaand that’s all for today, warriors!
Please let us know in the comments if you have questions! Or feel free to join our Discord server!